The proposed Electro Metallurgical Special Economic Zone (EMSEZ) threat in Makhado is both a huge risk to water users and the environment in the Limpopo valley, and difficult to take seriously, since it has so many irrational aspects. 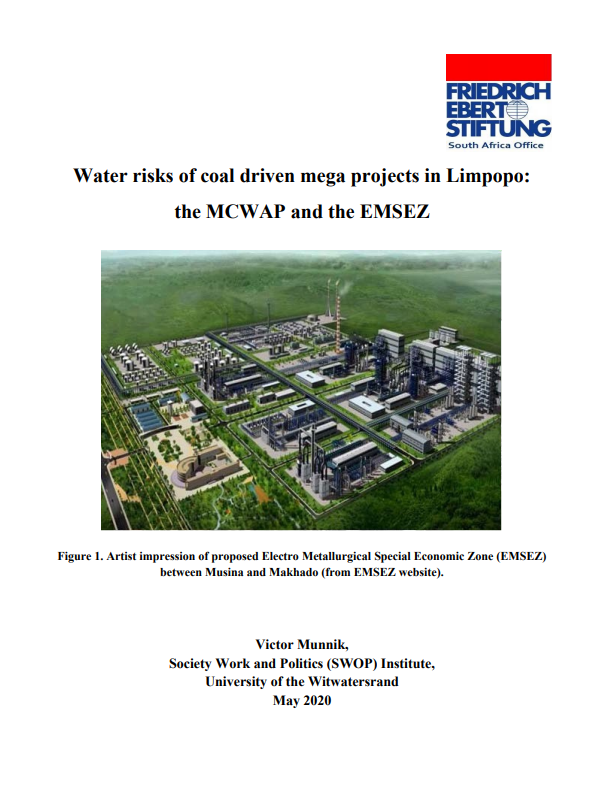 The Friedrich Ebert Stiftung commissioned Dr Victor Munnik, to research the status of water infrastructure development and the implications of proposals for further extractive development in the area of the Limpopo North water catchment; for example Premier Mathabatha telling an investment conference that water for an Energy and Minerals Special Economic Zone (EMSEZ) will be brought in from Zimbabwe.

This report focuses on the risks to other water users of two coal based mega projects in the water scarce area of the northern Limpopo province.

The old: After five decades of coal based development in the Waterberg, originally spurred on by apartheid fears of a lack of coking coal for steel production, the Mokolo Crocodile West Augmentation Project (MCWAP) project is now planned to bring in water for sulphur dioxide scrubbers on Eskom’s faltering Medupi power station, (their installation being a contractual obligation to the World Bank), and in the hope of expanding coal mining and electricity generation. The water will be from the heavily eutrophied Hartebeespoort dam on the Crocodile River, infested with water hyacinth and burdened with effluent from waste water works. Ultimately this water derives from the Lesotho Highlands Project.

The new: the Electro Metallurgical Special Economic Zone (EMSEZ) between Makhado and Musina, is a proposal for a 120-year mega project constellation in the context of post-apartheid South Africa and political conditions in its Limpopo province. This is against the background of the growing international influence of the People’s Republic of China and has serious international implications for the shared Limpopo river.

This report specifically looks at the risks these schemes hold for competing water users in the Limpopo area. The full report can be downloaded on the link below.