Around 100 alumni and staff attended the second annual Fort Hare Autumn School (FHAS) alumni networking event hosted by the Friedrich-Ebert-Stiftung at the Premier Hotel in East London on October 13, 2018. 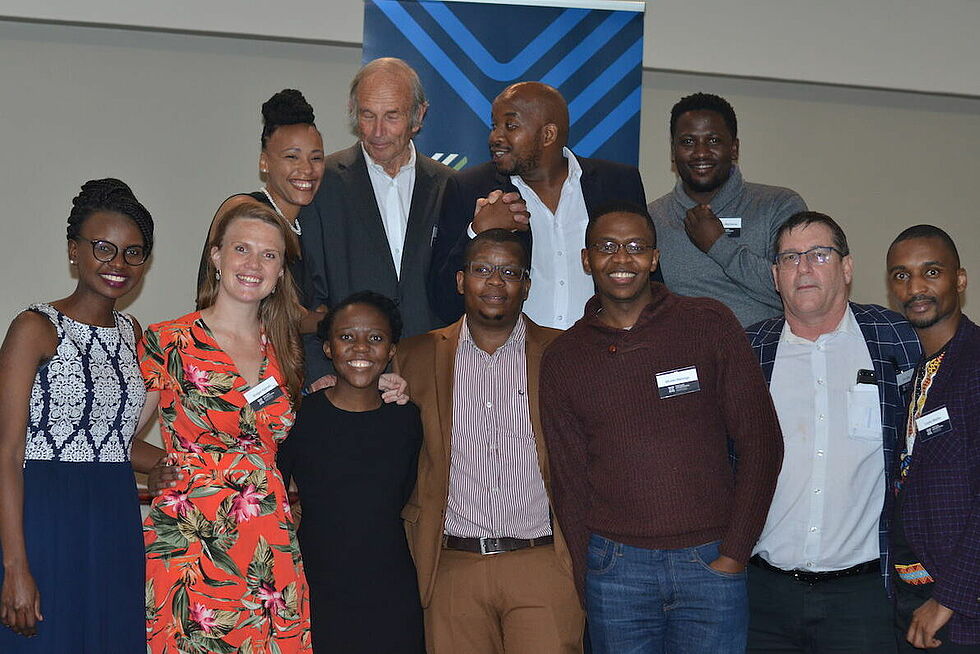 The annual Fort Hare Autumn School (FHAS) alumni networking was launched in 2016. It is an annual networking event that connects previous years cohorts with one another as well as members of partner organisations, and to catch up with their former teachers.

Three former students shared their experience as graduates of the FHAS. Xatyiswa Maqashala, a 2014 cohort spoke highly of her time on the programme. She outlined her path following her graduation from FHAS, which took her to the United States for the Mandela Washington Fellowship, and her work as a motivational speaker in the Eastern Cape. Xatyiswa found the programme to be of high quality and excellence and had also established friendships and networks that lasted until today.

Guests also heard from Sanele Ntshingana, a 2017 cohort who shared the work of his organisation Makhanda Black Kollective established in May 2018, an interdisciplinary and intergenerational project consisting of artists, social justice and environmental activists, parents and students from and around Makhanda, Eastern Cape, South Africa. The Kollective seeks to mobilise and to organise abahlali baseMakhanda (dwellers of Makhanda) to various educational programmes aimed at opening new vistas of critical thought and social action.

The evening ended with an address by the Deputy Minister of Justice and Constitutional Development, the Hon John H Jeffery who spoke about leading with integrity in the 21st century: challenges and lessons. On the issue of integrity, he said, ‘we often talk about integrity, but what exactly is it? His response to this question was ‘I would argue that it’s a lot like charisma: very hard to define in words, but you will immediately know it when you see it. Integrity in leadership, obviously means being honest, having strong principles and doing the right thing. But it’s also more than that. The concept is often used as a term indicative of virtue. Integrity emanates from the Latin word “integer”, a word which means whole or complete, intact. The Latin word was also used as a mathematical term referring to whole numbers. Integrity thus means something that is holistic, complete – it’s whole. One could almost say it means “wholeness of character”. I also believe that it’s more than just honesty, but also about being authentic, and being consistent. It means being a “yes, means yes” person – when you undertake to do something, do it, otherwise people lose faith’.

He said that when one looks at recent events in our country, one could very well be left with a view that integrity is a rare commodity. He pointed out that It was recently reported in August that the Competition Commission has recovered about R290 million in settlements in the motor industry. In a case that has been dragging since 2012, the Competition Commission reached a settlement with Japanese company Kawasaki in a price-fixing case against them.

The Competition Commission has now initiated an investigation against the Publishers’ Association of South Africa and its over 91 members for fixing prices of books. After allegedly receiving information pointing to the fact that the association and its members who are publishers, book importers and sellers of books to government departments, educational institutions, retailers among others, may have been involved in fixing prices of books in contravention of the Competition Act.

Deputy Minister, said he was fortunate to have worked alongside many truly courageous and principled people in his time in the liberation struggle.

He said the struggle was led by people with integrity, people who stuck to their convictions regardless of the enormous danger, hardship and suffering that it brought them and their loved ones.

He went on to say they set the bar high and it is imperative that those in leadership today live up to that very same standard. There is no room in today’s politics for what a columnist, yesterday in a News24 article, called “stomach first, liberation after.”

Deputy Minister John Jeffery has had the privilege to part of the Autumn School for a few years now and to have seen the high calibre of student leaders that come through the School’s doors. He said all alumni in attendance are leaders in their own right and that being a leader is, of course, not always easy – often it means being a lone voice, or having to deal with setbacks. It means having to be unpopular at times, having to face constructive criticism, or having to do tough introspection. But all these challenges are necessary for leaders to grow.

Transformation is something we know well in South Africa, which is why our people have the capability to provide leadership, especially in times of change.

The Friedrich-Ebert-Stiftung shares a long history with the African National Congress and COSATU. From the 1980s, the FES supported the ANC in exile. Within South Africa, they worked together with the evolving trade union movement, mainly through university-based labour support organisations. He congratulated and thanked the Friedrich-Ebert-Stiftung and the FHAS Board for their continued support of the Fort Hare Autumn School.

His closing words were ‘in identifying and nurturing the talent of our young people, we ensure that there will be sound leadership in all sectors of our society, bringing with it social change and changing the world for the better.’