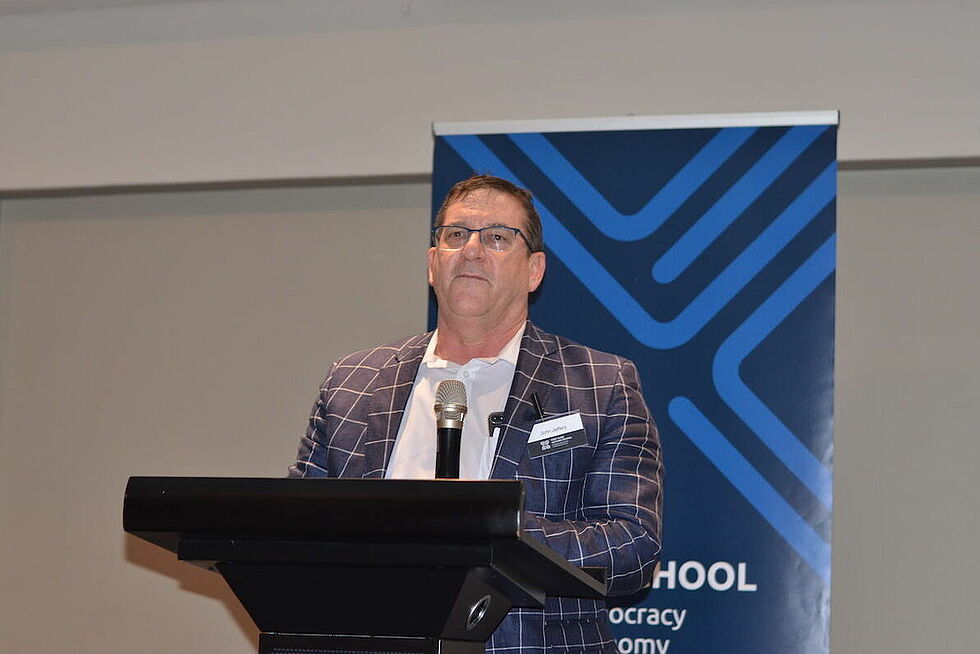 Director of the Friedrich-Ebert-Stiftung, Mr Heinz Bongartz
Members of the Board of the Fort Hare Autumn School
Ladies and gentlemen, friends

Leadership is an old as humankind – whether one looks at ancient Egypt, China, classical Rome, Greece, Mesopotamia, choose any earliest example of civilization – there is always someone leading, someone driving events, changing history.

Leadership studies and styles of leadership are topics that have intrigued people for centuries.

It is an area that has been studied by historians, psychologists, sociologists, anthropologists and business people.

Why do people follow certain leaders, while other leaders are quickly replaced or removed from power?

Why did certain civilizations and, later nation states, move away from the idea that leaders – such kings and queens – acquire their positions through birth and decide to go the way of elected leaders?

Why are there, still today, countries with autocratic leaders who remain in office for years? Why can a change in leadership be coupled with violence in certain countries, but other countries have peaceful transitions?

It all comes down to leadership.

A leadership style refers to a leader's characteristic behaviours when directing, motivating and managing groups of people.

Great leaders can inspire nations, bring about social change and change the course of history. They can also inspire others to create and innovate.

There are many different leadership styles – the most prominent ones being:

Transformational leaders are inspiring because they expect the best from everyone on their team as well as themselves.

Of course no one leadership style is ideal or perfect – as different situations can often call for different types of leadership.

But it’s useful for people to know their own individual leadership style, as it allows one to know one’s strengths and weaknesses.

So what makes a good leader?

As you know, this year we are celebrating the centenaries of the birth of Mama Albertina Sisulu and of the late President Nelson Mandela.

In July this year, to coincide with Madiba’s date of birth, Forbes published an article on what it calls “Madiba Leadership” and reflected on 5 aspects that he taught us about leadership and change.

When you find a cause worth fighting for you become passionate and passion fuels the fires of perseverance.

I think every person has something that they feel passionate about – it’s about finding our own passion, not someone else’s passion or what we think should be our passion, but our true passion – and focussing our energies into that.

2. Expect Change To Be Messy

Innovation and change rarely follow a nice, neat linear path. Driving change often causes sacrifice, misfortune and pain. In short, if it was easy, everyone would be successful, but it’s not.

3. Forgiveness Is Key To Focusing Forward

I think, simply put, living in the past serves no purpose. Carrying around hatred, trauma or resentment means giving negativity a hold and fuelling it.

4. End Right vs. Being Right

As Madiba said: “You mustn’t compromise your principles, but you mustn’t humiliate the opposition. No one is more dangerous than one who is humiliated.”

As humans we often have to be right at all costs – we have to win the argument, we have to get the last word in, despite destroying the bigger relationship in doing so.

It’s a phenomenon one often comes across on Twitter, and make no mistake, I myself am a regular tweeter.

It’s ironic how we, as adults, teach children in schools not to be bullies – only for adults to then bully others on Twitter or on the comments’ section of online news articles.

Instead of trying to persuade others with our arguments, or debating a point, we resort to insulting them or we ridicule them, or we stereotype them. In other words, we want to be right, instead of ending the debate right.

5. Change Begins From The Inside-out

Basically, as the Michael Jackson song goes, it means starting with the man (or woman) in the mirror. Don’t expect other people to change, if you yourself are not prepared to do so.

I was asked to speak to you this evening about leadership with integrity.

We often talk about integrity, but what exactly is it?

I would argue that it’s a lot like charisma: very hard to define in words, but you will immediately know it when you see it.

On the issue of integrity in leadership, it obviously means being honest, having strong principles and doing the right thing. But it’s also more than that.

The concept is often used as a term indicative of virtue. Integrity emanates from the Latin word “integer”, a word which means whole or complete, intact. The Latin word was also used as a mathematical term referring to whole numbers. Integrity thus means something that is holistic, complete – it’s whole.

One could almost say it means “wholeness of character”.

I also believe that it’s more than just honesty, but also about being authentic, and being consistent. It means being a “yes, means yes” person – when you undertake to do something, do it, otherwise people lose faith.

One has to be upfront and say that when one looks at recent events in our country, one could very well be left with a view that integrity is a rare commodity.

The Competition Commission has now initiated an investigation against the Publishers’ Association of South Africa and its over 91 members for fixing prices of books, after allegedly receiving information pointing to the fact that the association and its members who are publishers, book importers and sellers of books to government departments, educational institutions, retailers among others, may have been involved in fixing prices of books in contravention of the Competition Act.

In December last year, ArcelorMittal confirmed its first payment – R100m - of the record R1.5bn fine it was slapped with by the Competition Commission after pleading guilty to price fixing.

But we do have people with integrity.

David Everatt is the head of Wits School of Governance and he wrote an opinion article after the resignation of Finance Minister Nhlanhla Nene. Everatt calls the resignation “an act of decency and moral courage.”

He writes – and I quote:

“Nene said to South Africa: In return for the trust and faith that you have placed on me, I owe you conduct as a public office bearer that is beyond reproach. But I am human too, I do make mistakes, including those of poor judgement. This was followed by his offer to resign. This is accountability and decency. In any version of the world, this was a man seeking an honourable redemption. He acknowledged his own mistakes, sought forgiveness, and asked to be relieved of the trappings of office for which so many continue to drool and slobber. Were there questions to be asked? Absolutely. But what did he get in return? The Economic Freedom Fighters (EFF), whose leadership has repeatedly been accused of corruption, leapt to the offence, claiming Nene was “corrupt as hell” and promising to release more compromising details – which are yet to appear. The opposition Democratic Alliance (DA), desperately seeking the front foot it has lost since Ramaphosa’s ascendancy, demanded Nene’s axing and wanted other possible conflicts of interest investigated. Empathy is the ability to understand or feel what another person is experiencing from within their frame of reference. In simple terms, to put yourself in their shoes. It is singularly lacking in politics – from Trump mocking abuse survivors to South Africa today. Shout down the other side, win by volume and crassness, see honesty as weakness, but above all win – nothing else seems to matter.”

I must say that I agree with David Evaratt.

Those of us who have been in the liberation struggle have been fortunate to have worked alongside many truly courageous and principled people.

The struggle was led by people with integrity, people who stuck to their convictions regardless of the enormous danger, hardship and suffering that it brought them and their loved ones.

They set the bar high and it is imperative that those in leadership today live up to that very same standard. There is no room in today’s politics for what a columnist, yesterday in a News24 article, called “stomach first, liberation after.”

All of you are here as Fort Hare Autumn School Alumni.

I have been privileged to have been part of the Autumn School for a few years now and to have seen the high calibre of student leaders that come through the School’s doors.

All of you are leaders in your own right.

Being a leader is, of course, not always easy – often it means being a lone voice, or having to deal with setbacks. It means having to be unpopular at times, having to face constructive criticism, or having to do tough introspection. But all these challenges are necessary for leaders to grow.

He mentions a number of characteristics necessary for effective leadership in the 21st century, such as critical and creative thinking, self-awareness, communication and dialogue, social and cultural intelligence, and facilitation of team and collaborative processes.

“Broadly speaking, leadership can be viewed as our individual and collective response to change the world for the better.

Transformation is something we know well in South Africa, which is why our people have the capability to provide leadership, especially in times of change.

Some of you may know that the Friedrich-Ebert-Stiftung shares a long history with the African National Congress and COSATU. From the 1980s, the FES supported the ANC in exile. Within South Africa, they worked together with the evolving trade union movement, mainly through university-based labour support organizations.

I want to congratulate and thank the Friedrich-Ebert-Stiftung and the FHAS Board for their continued support of the Fort Hare Autumn School.

In identifying and nurturing the talent of our young people, we ensure that there will be sound leadership in all sectors of our society, bringing with it social change and changing the world for the better.