Project 90 takes an organic, participatory approach working through their Energy SMART Citizens in Action project with twelve residents in the Cape Flats, and their youth development programme YouLead Initiative in neighbouring Khayelitsha. 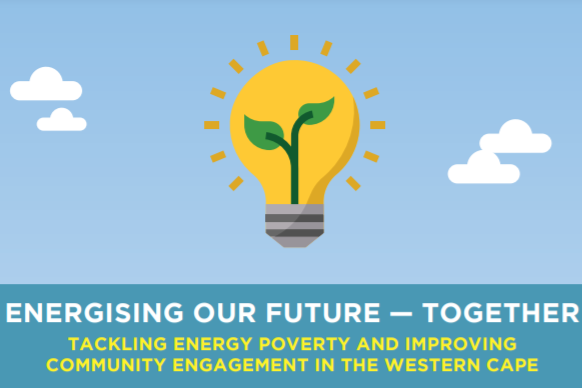 In 2021 the Just Energy Transition (JET) work undertaken by Project 90 by 2030 (based in Cape Town) has focused on the user side of the electricity system, exploring the challenges faced by households within the distribution system (as operated by municipalities or by Eskom) as a basis for developing information materials in workshops with the intended users. Project 90 takes an organic, participatory approach working through their Energy SMART Citizens in Action project with twelve residents in the Cape Flats, and their youth development programme YouLead Initiative in neighbouring Khayelitsha.

A wide range of issues were identified by undertaking an informal survey in the Cape Flats, which includes informal settlements with no legal electricity supply, though most communities are grid-connected and should be receiving the Free Basic Electricity (FBE) provision for the poor or ‘indigent’, as mandated by a dedicated FBE policy. It became clear that energy poverty is the common experience, with recent price increases compounded by complex tariff structures that are not consistent across the City of Cape Town, nor consistently applied within communities or billing or metering systems.

Producing an introductory guide to electricity tariffs is particularly challenging (it remains in draft form) due to lack of uniformity: various tariff options are available associated with different household consumption patterns and may be changed for a household as consumption varies; the tariff structures have changed over the years; there are widespread experiences of meters being unreliable or pre-paid vouchers yielding inconsistent amounts of electricity.

To access FBE requires providing the City of Cape Town with extensive documentation to establish ‘indigent’ status, to qualify for only 50 kWh per month per grid connection point, no matter how many depend on that point of supply. Furthermore, the allocation may be revoked if consumption exceeds a designated monthly amount.

Advancing energy democracy at the local level and from the bottom up is a daunting challenge, but this initiative has made a start and hopes to inspire local authorities to join the effort.