seriously depleted public confidence in the role of state in land reform. 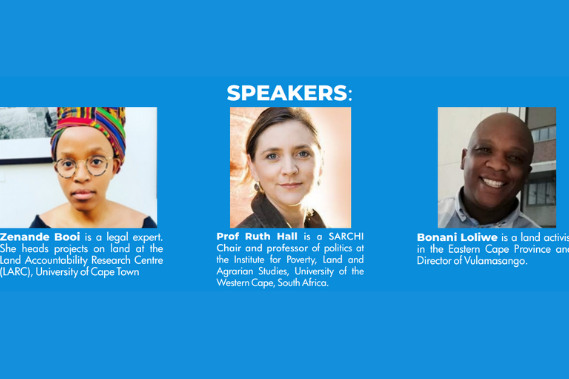 FORT HARE FRIDAY SEMINAR SERIES (FHFSS) WEB-SEMINAR- Three Years After Nasrec: What is to be done about land expropriation?

South African government's poor performance in addressing the historical injustices through land redistribution has seriously depleted public confidence in the role of state in land reform. In the build-up to the 2019 general elections, the land issue became a raging wave on which major political parties drove their election campaigns. Calls for radical land reform centred on the amendment of Section 25 of the Constitution to allow for expropriation of land without rd compensation (EWC). The ruling African National Congress, in its 53 National Conference at Nasrec Johannesburg (December 2017), took a resolution to pursue EWC in order to expedite radical redistribution of land in favour of South Africa's landless black majority population. Subsequently, in December 2018, the National Assembly voted in favour of the Constitutional Review report, which recommended an amendment of Section 25 of the Constitution to allow for EWC.

However, more than three years after the Nasrec Conference, millions of black South Africans remain landless and poor. There is not much of the land debate left in the political landscape. The 'radical left' political voices that drove the issue of EWC into the centre of their political campaigns seem to have shifted their focus away from the issue. Hopes have dampened even about the new Expropriation Bill that is currently being debated in the National Assembly. Some argue that the Bill has limited connection and relevance to the ongoing process of amending Section 25 of the Constitution.

Therefore, it is now a crucial moment to ask:

- Where is South Africa's process of land expropriation heading?
- Is there still any remaining hope among the landless poor in the ongoing process of policy shift towards EWC?
- Is the land issue currently at risk of becoming a potent weapon in the hand of populist politicians? And
- What is to be done about land expropriation?

Please confirm attendance in order to receive the link to the event.