The seminar will attempt to answer the question of whether it is possible to change social relations of production within the current capitalist economy, and explores whether community owned renewable energy is a potential step in this direction. 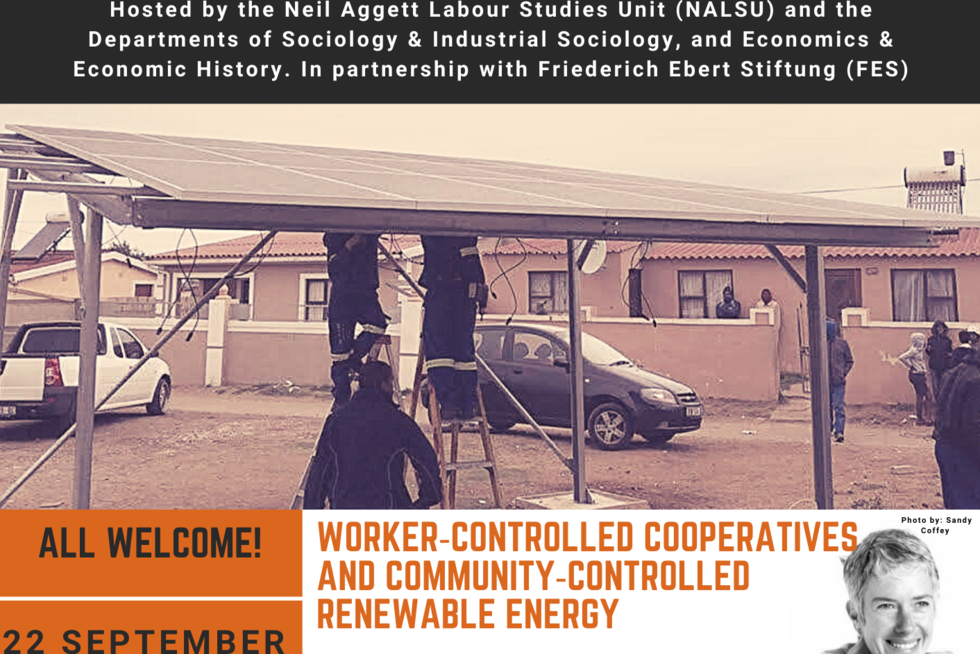 The establishment of the Saltuba Energy Cooperative in Kwazakhele township will be discussed as an example of both emancipatory scholarship and prefigurative praxis. The Saltuba Cooperative was formed as part of a participatory action research project under the banner of the Transition Township project. The transition refers both to the ‘just transition’ from fossil fuels to a sustainable economy, and to the transition to a more egalitarian economy. The seminar will attempt to answer the question of whether it is possible to change social relations of production within the current capitalist economy, and explores whether community owned renewable energy is a potential step in this direction.

SPEAKER:
Prof. Janet Cherry
Professor of Development Studies at Nelson Mandela University in Port Elizabeth/Gqeberha, South Africa. Her main areas of research are sustainable development, political economy, democratic participation, and social and political history. She has published widely on South African history, on labour, women’s and social movements, on transitional justice, and on sustainable development; her books are "Spear of the Nation: Umkhonto weSizwe: South Africa’s Liberation Army, 1960-1990s", and "Taking Democracy Seriously: Worker Expectations and Parliamentary Democracy in South Africa" (with Sakhela Buhlungu, Gilton Klerck, Eddie Webster et al). Active in the anti-apartheid underground, the unions and the United Democratic Front (UDF), she was repeatedly jailed in the 1980s.

The series is run by the Neil Aggett Labour Studies Unit (NALSU) in partnership with the Departments of Sociology & Industrial Sociology, and Economics & Economic History, Rhodes University and the Friedrich-Ebert-Stiftung  South Africa (FES).

NALSU, based in the Eastern Cape, South Africa, is engaged in policy, research and workers' education. Built around a vibrant team from disciplines including Economics, History and Sociology,  it has active partnerships and relations with a range of advocacy, labour and research organisations. It draws strength from its location in a province where the legacy of apartheid and the cheap labour system, and the contradictions of the post-apartheid state, are keenly felt. We are named in honour of Dr Neil Hudson Aggett, a union organiser and medical doctor who died in 1982 in an apartheid jail after enduring brutality and torture.