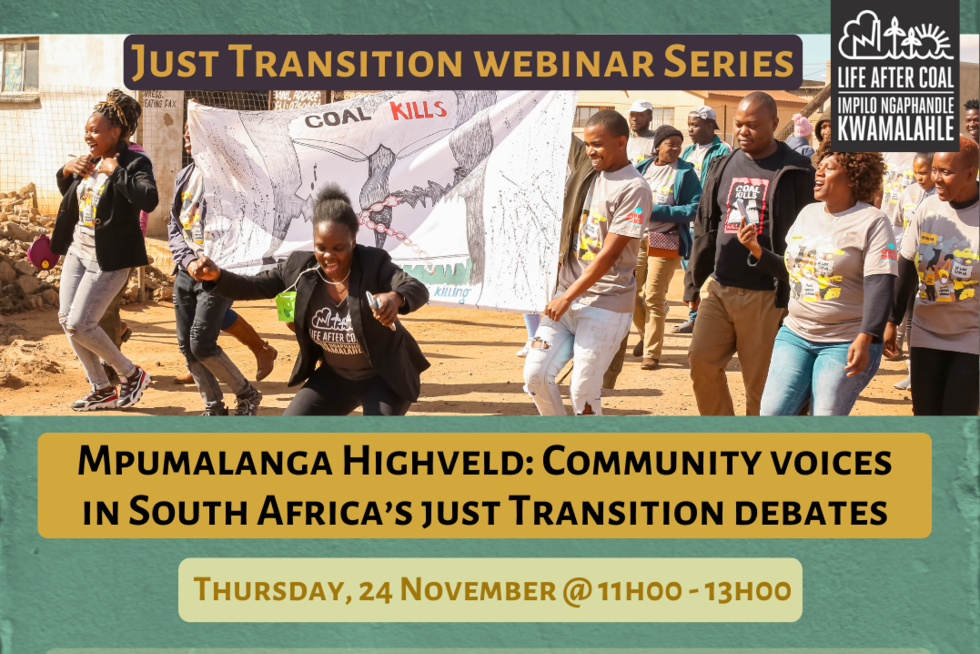 Community voices, especially those of Environmental Justice activists in communities on South Africa’s coalfields, provide important perspectives on South Africa’s unfolding and much debated Just Transition. This webinar features voices from Community Activist Researchers who have been involved in a project exploring responses in coal affected and coal dependent communities to Climate Change, coal closure and Just Transition issues.

The webinar will focus on the following issues:

- The need for communities to be involved in ongoing decision making about the JT as part of the JT Framework commitment to procedural justice – and activists’ experience of such participation.
- Activists have proposed that the JT should be built from the ground up, through community initiated projects. Some of these were specified during the research project.
- Making closed and abandoned mines safe for communities is an important issue for communities. The restorative justice dimension in the JTF requires attention to mine closure. Adjacent communities demand to be part of these processes.
-   The restorative justice dimension also requires urgent attention to health services dealing with pollution impacts on people. Currently health services are absent, impacted particularly on women.
- What do communities expect from community and municipal ownership of electricity generation facilities?
- Communities have a claim on land, water and other resources that will be freed up during the JT. How would such land and water resources be used?
-   The current economic system has caused the climate crisis and cannot be relied upon to fix it. What type of economy would community activists propose?