Views of universalism and deservingness from the South African unemployed 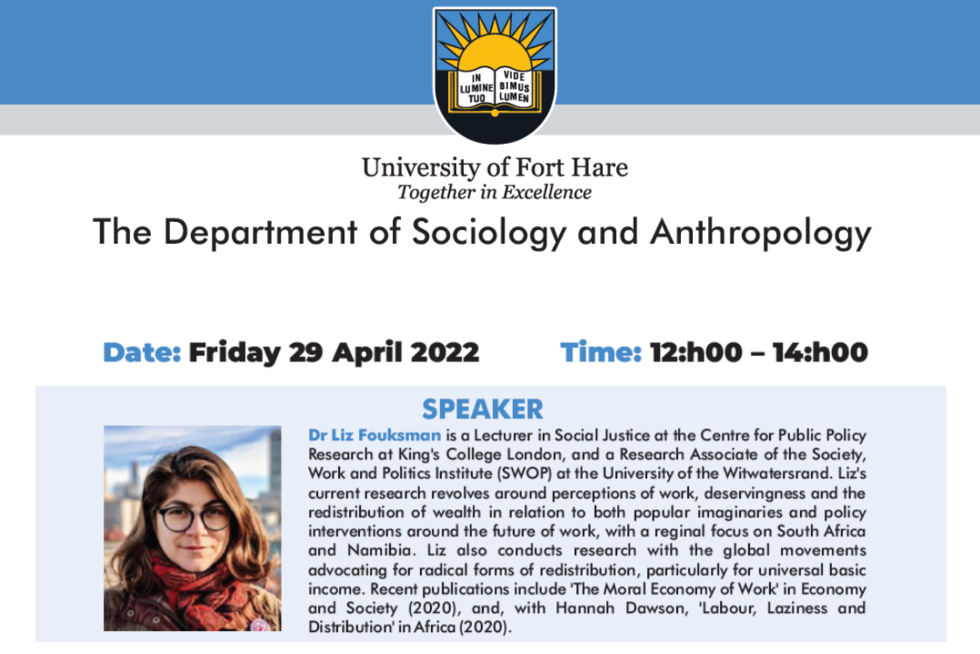 The idea of the deserving and undeserving poor – those who should and should not be helped with welfare and social protection – dates back at least to the Victorian and the colonial era. Perhaps the most puzzling aspect of this discourse of deservingness is not that it is enforced by policy makers, development professionals and the wealthy, but rather the lack of opposition it has received from ordinary people. My long-term fieldwork with the unemployed poor in inner-city Johannesburg, South Africa, demonstrates that worthiness through labour plays an ongoing and crucial role in my interlocutors' understandings of wealth creation and accumulation, and thus their political demands around distribution.

The event is part of the popular Fort Hare Friday Seminar Series – a partnership between the
University of Fort Hare (Department of Sociology and Anthropology), and Friedrich-Ebert-
Stiftung South Africa – FES-SA.

SPEAKER
Dr Liz Fouksman is a Lecturer in Social Justice at the Centre for Public Policy Research at King's College London, and a Research Associate of the Society, Work and Politics Institute (SWOP) at the University of the Witwatersrand. Liz's current research revolves around perceptions of work, deservingness and the redistribution of wealth in relation to both popular imaginaries and policy interventions around the future of work, with a reginal focus on South Africa and Namibia. Liz also conducts research with the global movements advocating for radical forms of redistribution,  particularly for universal basic income. Recent publications include 'The Moral Economy of Work' in Economy and Society (2020), and, with Hannah Dawson, 'Labour, Laziness and Distribution' in Africa (2020).