The seminar will unpack the key drivers of local conict in mineral-rich communal areas in South Africa. 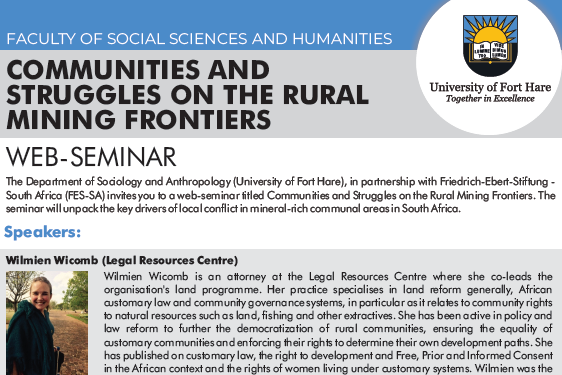 The Department of Sociology and Anthropology (University of Fort Hare), in partnership with Friedrich-Ebert-Stiftung - South Africa (FES-SA) invites you to a web-seminar titled Communities and Struggles on the Rural Mining Frontiers. The seminar will unpack the key drivers of local conflict in mineral-rich communal areas in South Africa.

Wilmien Wicomb is an attorney at the Legal Resources Centre where she co-leads the organisation's land programme.

Wilmien was the instructing attorney in the matters of Gongqose and Others v The State (customary fishing rights), Ntamo and Others  v Premier of the Eastern Cape (elected headmen) and represented LAMOSA before the Commission of Inquiry into the affairs of the Bakgatla ba Kgafela traditional community.

Sonwabile Mnwana is Associate Professor of Sociology at the University of Fort Hare. His research focuses on land and distributional struggles in South Africa's rural mining frontiers. Mnwana has published widely from his research. Mnwana is also a Research Fellow at the Institute for Advanced Studies in the Humanities (IASH), University of Edinburgh (UK)

David van Wyk is a renowned activist, public intellectual and researcher. He is currently a lead researcher at the Bench Marks Foundation where he responsible for 11 out of 13 major Bench Marks Research Reports. His research has been published widely in a number of peer-reviewed journals and books. He also previously held various senior management positions in the North West Provincial Government between 1994 and 2004.

Please confirm attendance in order to receive the link to the event.